Real life stories give both newly diagnosed ITP patients, and their caregivers, an understanding of what the journey ahead may hold.

By sharing stories we can take comfort from the fact that we are not alone on this ITP rollercoaster and we can share in your moments of triumph and hope. Your story may shed some light on the impact ITP has on your quality of life, this can be an eyeopener for the medical professionals treating ITP patients and can help them to form a clearer understanding of the impact of this autoimmune disease.

Hear from our CEO Danielle as she shares her story.

I was diagnosed on Friday 26 July 2015 by accident. I headed to hospital with chest pains. After a full blood count and a chest x-ray the emergency doctor said I had ITP. 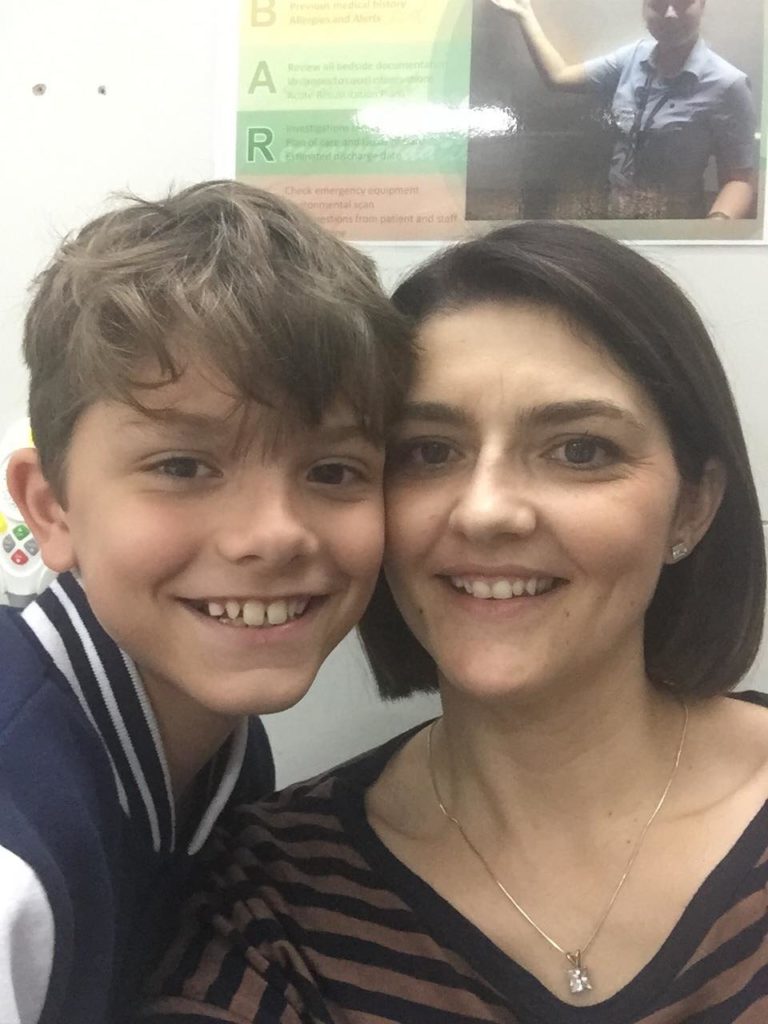 “I have what?” “Isn’t that the place you get your tax done?” “What’s that got to do with my chest pains?”

So I put my head down and started Googling like I’m sure a lot of us have done when we’re first diagnosed. I didn’t know what ITP was. I’d never heard of it before. I barely knew what a platelet was.

I was admitted to hospital three days later with a platelet count of 16, given prednisone as my first treatment. I had so many blood draws that I stopped counting how many vials they turned up with. After my count rose above 30 – apparently this number was somehow significant – I was discharged three days later. It certainly wasn’t my idea of a good weekend, but there I was, placed in the oncology ward with people who clearly looked unwell, while I sat there bored out of my brain, looking nothing but a picture of health.

Luck did strike twice during my first short stay. I was at my local hospital, the Princess Alexandra, where I met ITP Specialist Dr Robert Bird (ITP Australia Medical Advisor) who was my new haematologist. My second stroke of luck was that he was running a clinical trial for ITP patients for this drug called Eltrombopag (Revolade) for people who were newly diagnosed and still had a spleen – and after googling, they weren’t taking an organ just yet – so I started on the trial. 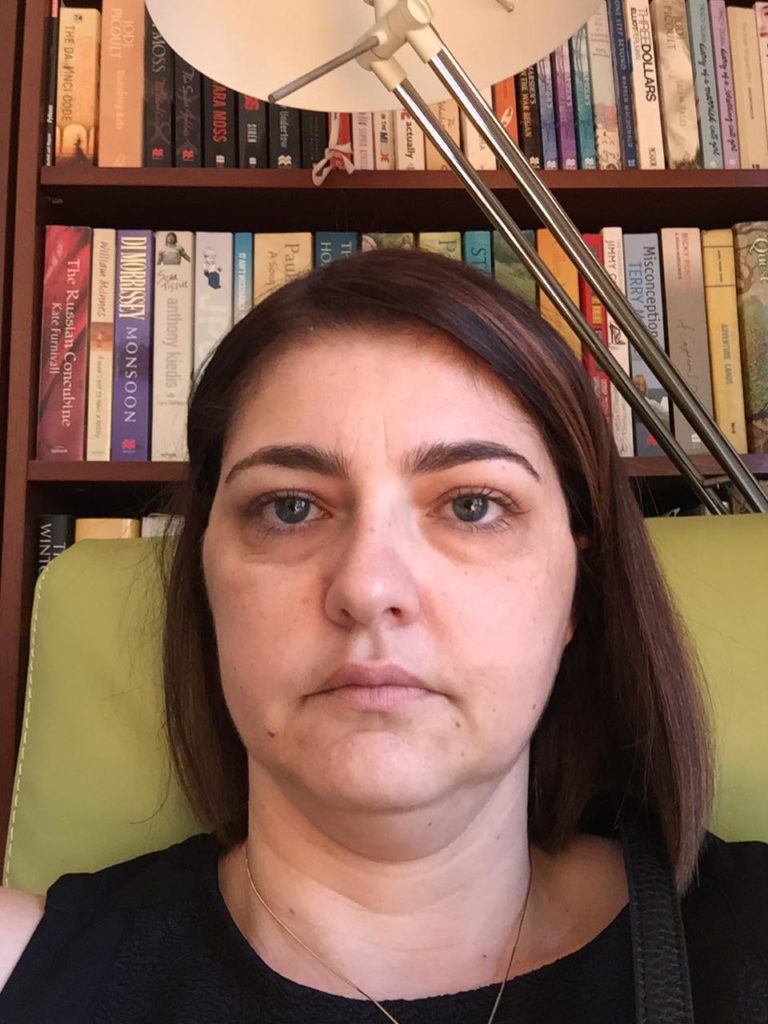 Like most other patients have mentioned, steroids made life impossible and not just for me, but for my family too. Walking on eggshells around me for weeks on end must have been extremely difficult. Luckily Dr Bird saw that things weren’t improving, so we tapered off.

Unfortunately, it wasn’t the only thing ‘stopped’, my husband and I had planned a holiday to Hawaii and because I wasn’t stable – counts and my mental health – there was no way he was going to give me the green light to travel.

My heart sank and I cried for days and even contemplated jumping on the plane anyway, but I knew better and had started to build some trust with Dr Bird.

It took some time to stabilise, however over the course of the next few months, my counts started to improve and I continued on the trial for three years where my counts would go up and down, but with few issues or symptoms.

Then one day it happened. In October 2018, my counts started to dive. At first, it wasn’t too bad, but as they continued to drop I started to experience more and more symptoms. It was time to go back onto steroids to see if we could ‘catch’ them before they got too low.

Now, I wasn’t a fan of this idea especially after my first experience, however, I knew that it was the right thing to do.

In addition to the steroids we started trying more treatments. I was getting concerned as I’d already had one holiday cancelled and my daughter was getting married in the UK the following year. There was nothing that was going to stop me from getting on the plane, but I also needed to be healthy. 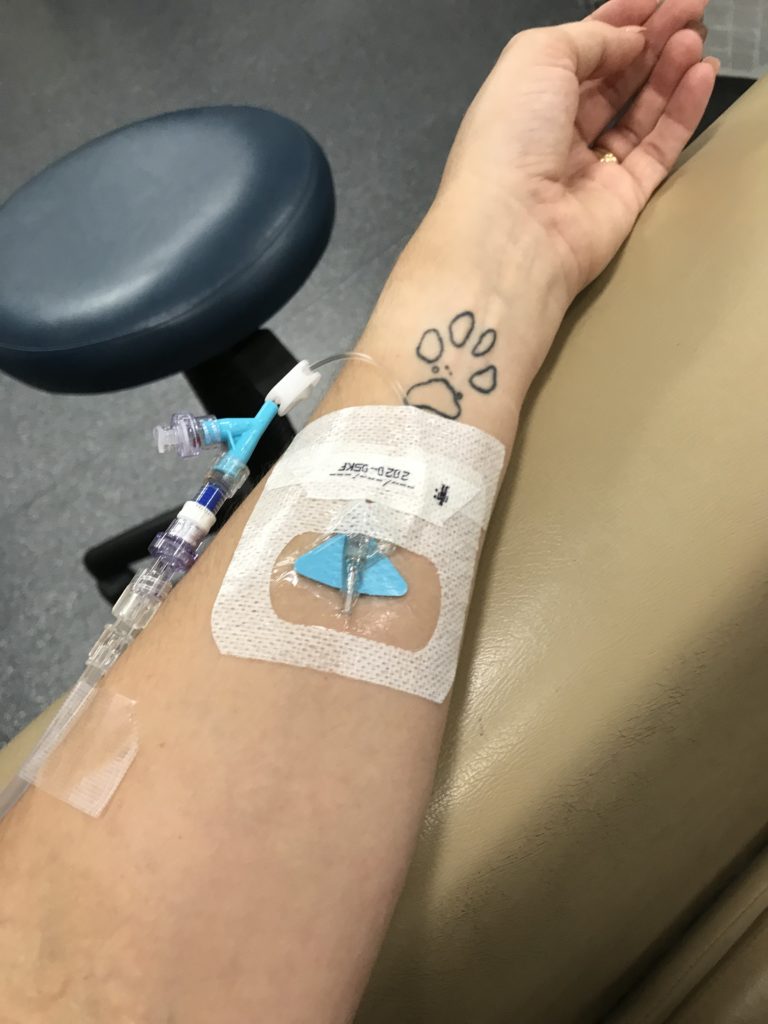 First, we tried a four week course of rituximab. Next we – and I mean the whole family – completed a course of the H-Pylori Eradication. After that, I tried mycophenolate but nothing seemed to be working or improving my count.

In January I had my first round of IVIg. A total of six bottles as an outpatient. I watched as others came and went as I sat there for more than six hours keeping my arm straight and trying to stay busy. 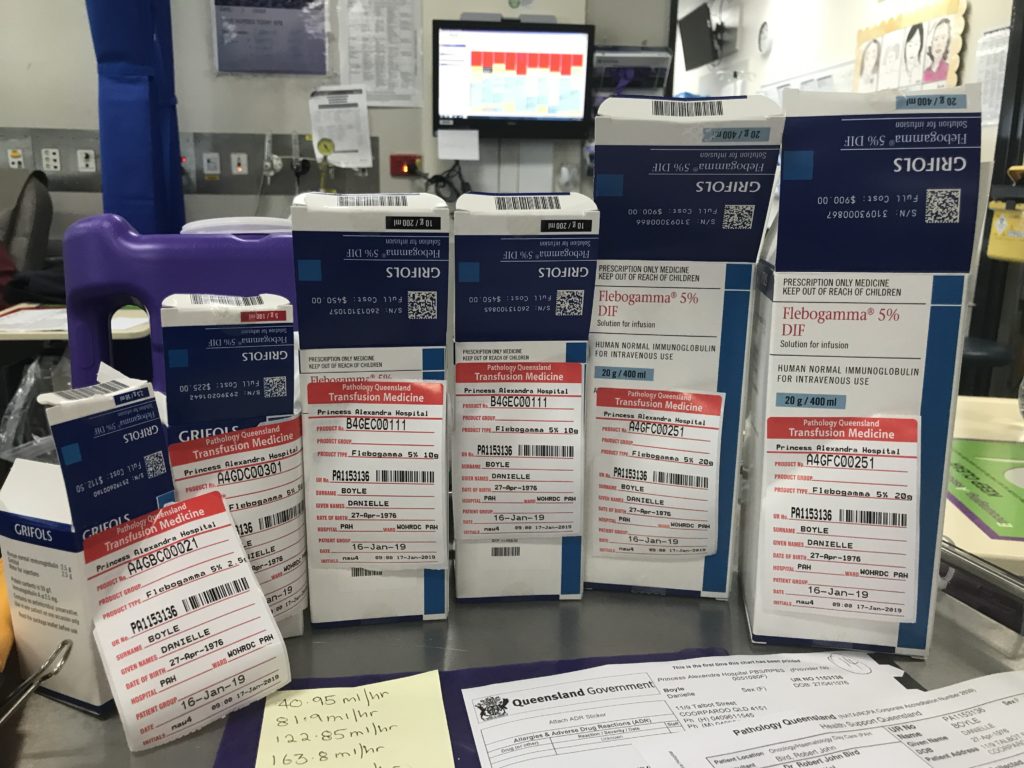 First round of IVIg

A few weeks later things went from bad to worse. I was admitted to hospital due to my ‘cycle’.

This was when I had my second round of IVIg. Every two weeks back and forth having IVIg and increasing my steroid dose to see if it would help.

I was admitted again in February for the same reason as before. It was clear that the effectiveness of IVIg wasn’t as good with me as it had been with others.

And by this time, I was travelling interstate, having to get blood draws at local hospitals and pathology clinics every couple of days to make sure that my count wasn’t getting too low.

This is when I really started to worry. Maybe I wasn’t indestructible. Maybe ITP really did have me.

I needed to jump on a plane in early May and be healthy. While we’d always said that it was a last resort, it was now time to give the green light to a splenectomy.

I booked my Golden Ticket for late March, but of course nature took control and I was admitted a week early and underwent five days of IVIg ahead of surgery. 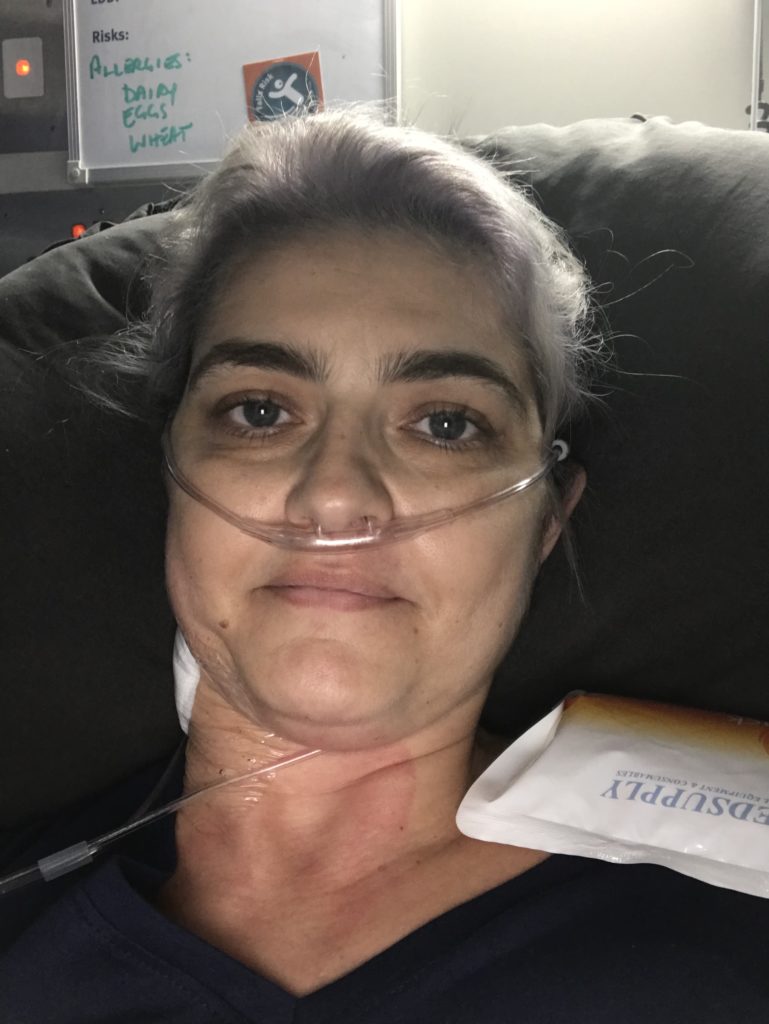 The surgery went well and the spleen was removed laparoscopically with little issue. I was discharged a few days later and sent home to rest and recover.

I’d never had surgery before and wasn’t sure what to expect. I thought that I’d need a week off, then be ‘back to normal’ a week or so later. But I didn’t improve and the pain continued and then got much worse. By this time I was thinking that I was being a sook with a low pain threshold, so, I just kept going.

Boy was I wrong!

I headed to my GP for some more pain meds. At times not even they worked, but I was hoping that things would just settle on their own.

My GP wasn’t too concerned and sent me for a non-urgent ultrasound to check for a possible small internal bleed, even though there were no signs. “Better to check” he said.

I knew that something was wrong so I booked an ultrasound for the following day.

Jake and I headed off to the appointment, as I wasn’t able to drive, and I said to the technician that the GP mentioned that there might be a small bleed.

I had developed a blood clot, or Portal Vein Thrombosis (PVT), and he asked how I’d been dealing with the extreme pain.

OK, maybe I wasn’t going crazy and maybe my pain threshold wasn’t bad after all.

This wasn’t any normal blood clot. I was instructed to go to the emergency department immediately … do not go home … do not pass go … do not collect $200! We waited for the report and headed straight to the ED where I’d had my surgery.

On further inspection and imaging, I learned that my blood clot was special. More than 50% of patients who undergo a splenectomy will develop some sort of blood clot, but I’d developed a blood clot so large that we named her ‘Clotzilla’. She was so large that my surgeons said they had never seen one so large. 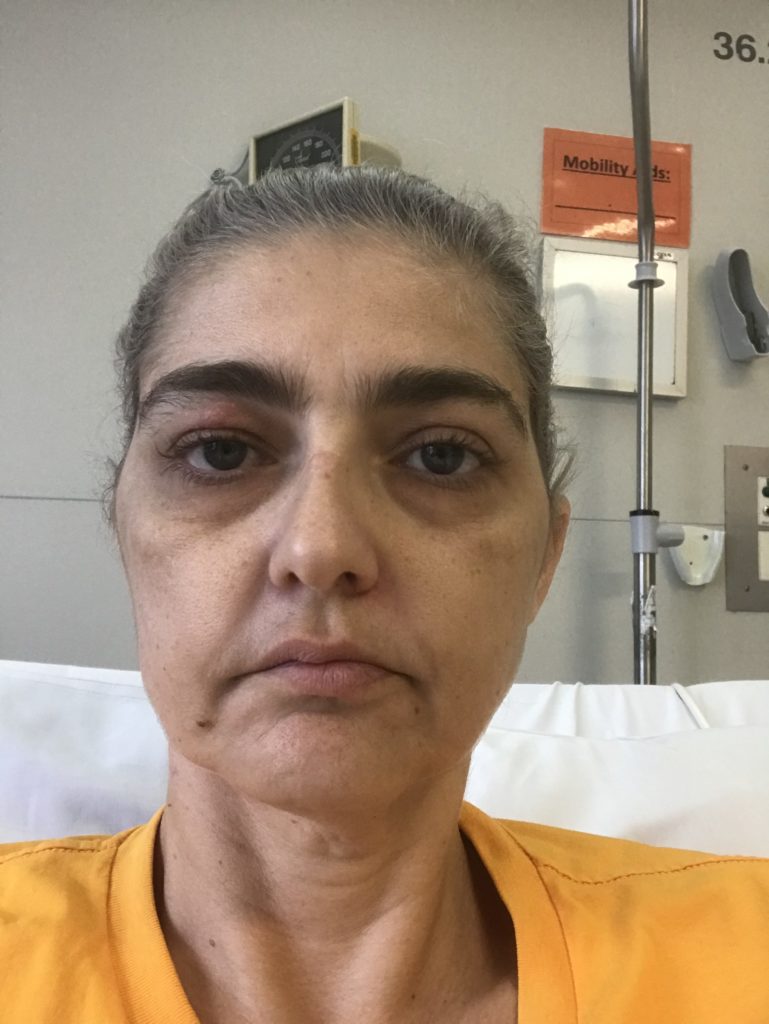 I was readmitted to hospital for another couple of days to get the clot and my pain levels under control, however, I had one more piece of fun to complete the whole experience. My body had undergone so much stress and trauma that I developed shingles on my eyelid. Not how I’d recommend getting a private room, but there you go.

After being discharged, I managed to recover and re-build my strength and my health. I stayed on the steroids for a little while longer and even started back on Eltrombopag as my numbers had started to fall post-surgery. 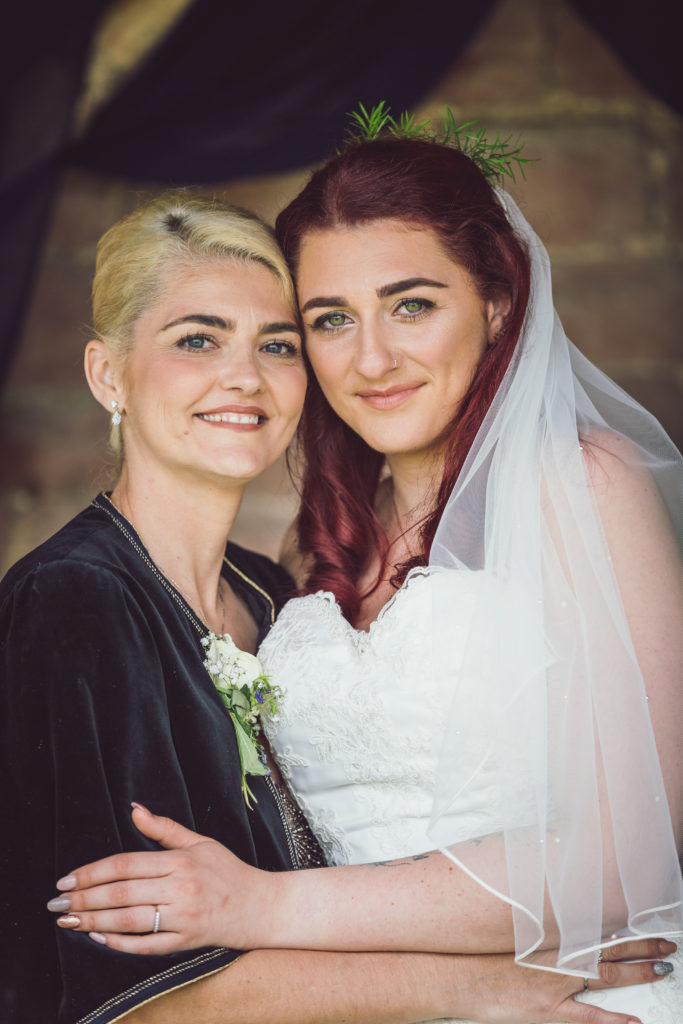 I did manage to make it to my daughter’s wedding, and she was beautiful and radiant like all brides. My health too has continued to improve and my most recent count was 181. Not too bad.

It’s taken me a long time to be able to share my story like this, and sometimes I look at the scars both physically and mentally and wonder how I even got through it. Yes, there are still waves of emotion too, but the main thing that drives me to keep going with ITP Australia is helping others and letting them know that while this may be a snowflake disease, that they aren’t alone. There’s a whole network of warriors out there to help, listen and support.

If there was one thing that I would have loved to hear when I started on my ITP journey, and then have it repeated back to me at certain points would be, “It will be ok. You will be ok.”

Lastly, I’d like to say a huge thank you to my support network including my extremely patient and supportive husband Jake and kids Chloe and Kyle. My inner circle – you know who you are, and of course the friends I’ve made along my ITP journey. Your support and consistent messages checking in, kept me going and have made this journey easier.

Want to share your story? Download the editable form to complete or write it yourself and email it to us along with a few photos of you along your journey.